Wat Rampoeng Tapotaram (วัดร่ำเปิง ตโปทาราม) is located at the foot of Doi Suthep, the mountain that overlooks Chiang Mai.
It is a well-known meditation centre. It offers a 10-day long silent Vipassana meditation retreat. “Vipassana“ is a word of Indian origin which means “seeing clearly”, and it’s often translated as “insight”.

The chedi is Wat Rampoeng is of specific architectural design, which is called “khong Prajao”.
This is a round-shaped chedi, which is multi-tiered from the base to the apex. Each tier has deep niches containing Buddha images or amulets. Examples of this style can also be seen at two other temples in Chiang Mai: Wat Phuak Hong and Wat Chedi Plong.

Robert Larimore Pendleton made this aerial picture in January 1951. It shows the temple on the right side of the picture. I have not been able to make a comparative picture unfortunately.

Looking southwest along the foot of Doi Suthep mountain from the western part of the Chiang Mai valley, Northern Thailand. Note the considerable grove of teak trees beyond the paddies in the middle distance. January 1951

This old temple was deserted for long periods until 1974, when an abbot moved in and started rebuilding the temple. 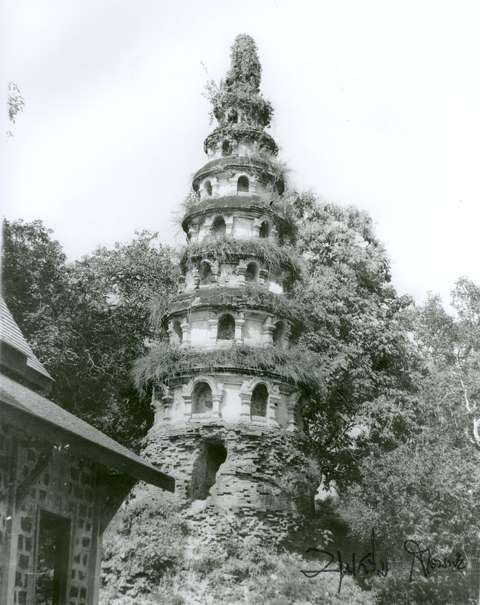 Garnet Hoyes who worked at the Science Department of Chiang Mai University in the 1970’s. He made these two pictures of the temple. The featured image is one. This is the other.

I made these pictures earlier this year on a gloomy day. 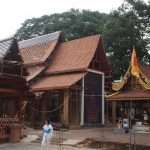 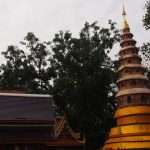 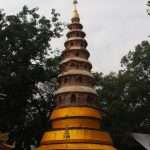