The Ratchadapisek Bridge in Lampang 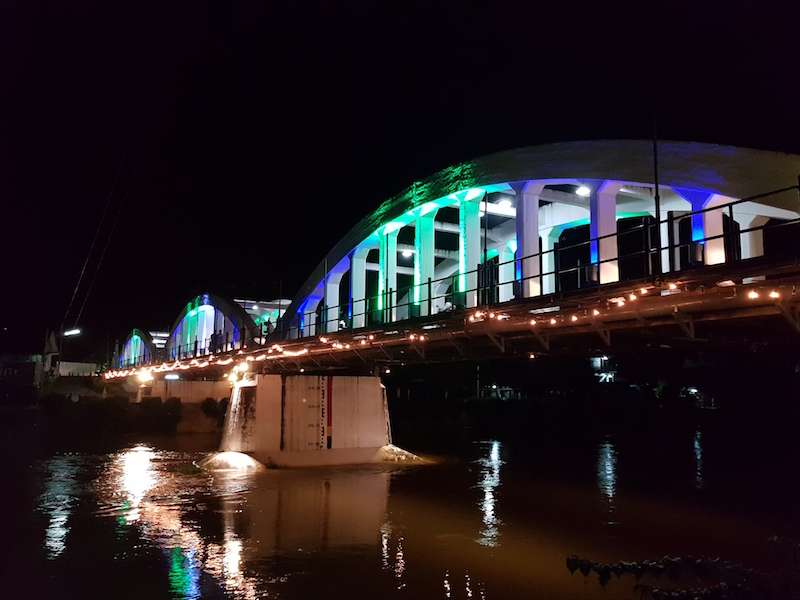 The most beautiful bridge of North Thailand

History of the Rachadapisek Bridge

The iconic Ratchadapisek Bridge in Lampang crosses the Wang River. It is also known as Ratchada or White Bridge. At this location, a wooden bridge was constructed in 1894 to honour the 25th anniversary of the accession of the throne by King Rama V or Chulalongkorn. The bridge collapsed in 1901 under the force of teak logs that floated down the river from the Chae Hom area. It was decided to construct a new and stronger bridge with an iron-wood structure at this location. That bridge opened in 1905 but also was not able to withstand the force of teak logs in the flooding season. It collapsed in 1915. Finally, King Rama VI agreed on the construction of a concrete bridge. This bridge opened in 1917 and it is still there.

The logging companies that were active in Lampang were the Bombay Burma Trading Corporation, Louis T.Leonowens Co. Ltd. and the Anglo-Siam Corporation. There was a flood caused by “forest water” from the Chae Hom area northeast of Lampang where the Wang River originates. This happened on August 27, 1919. Logs damaged houses on Kad Tong Ta which was called the Chinese market at that time. The flood went up to the offices of the Louis T.Leonowens company that were located on the other side of the river before the Rachadapisek Bridge as we found out. The bridge withstood the force of the teak logs. 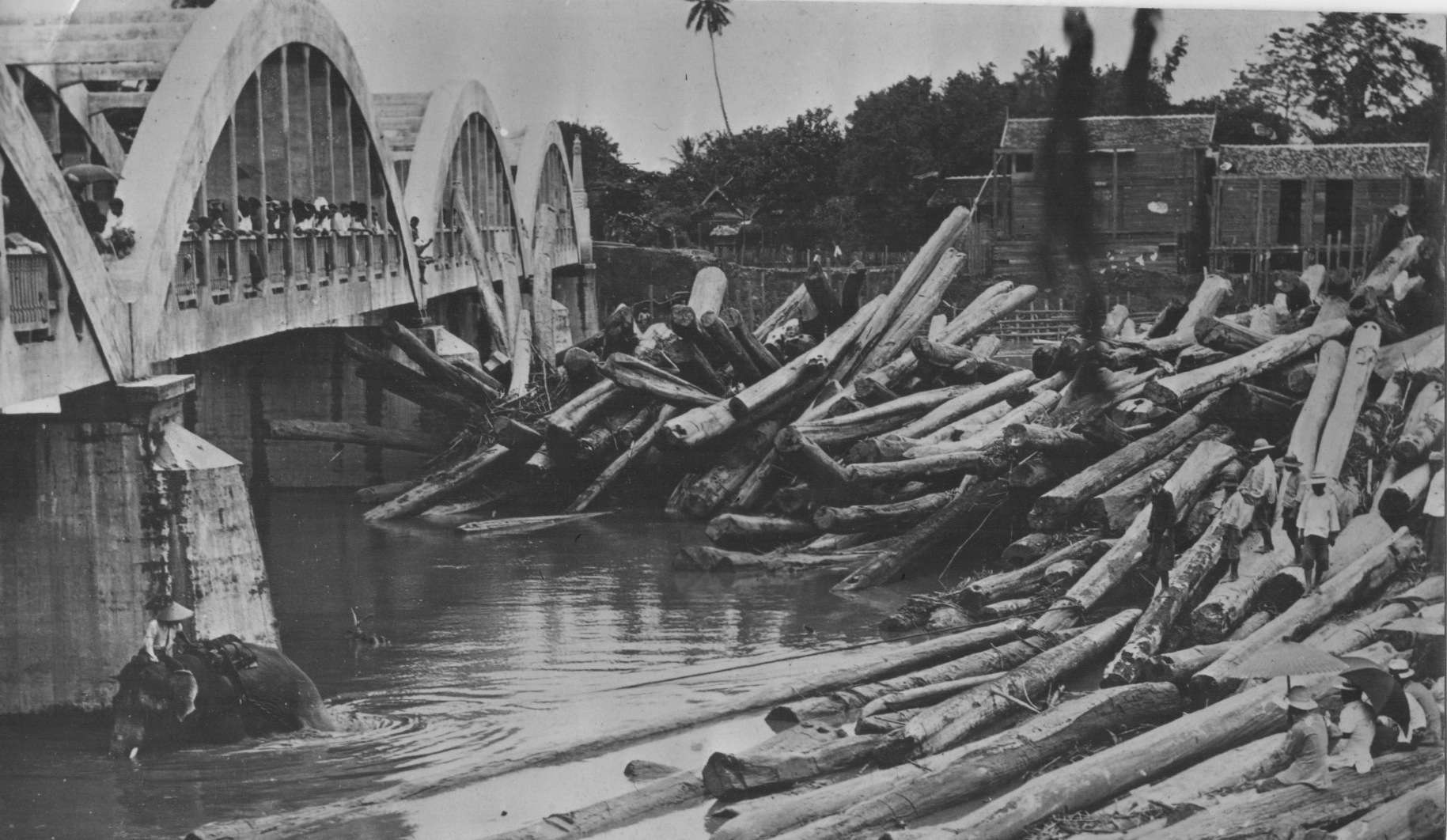 This picture was taken by Oliver Backhouse from, what we think, the same location. 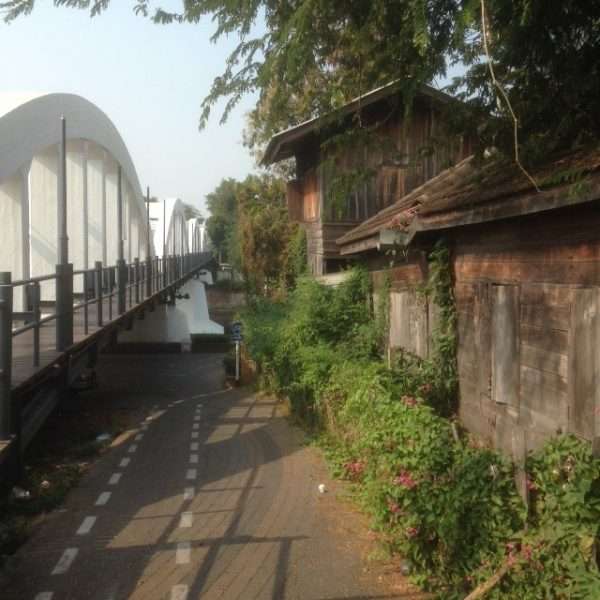 The flood also went up to the residence of the ruler of Lampang. It receded on August 30. There was a lot of damage. 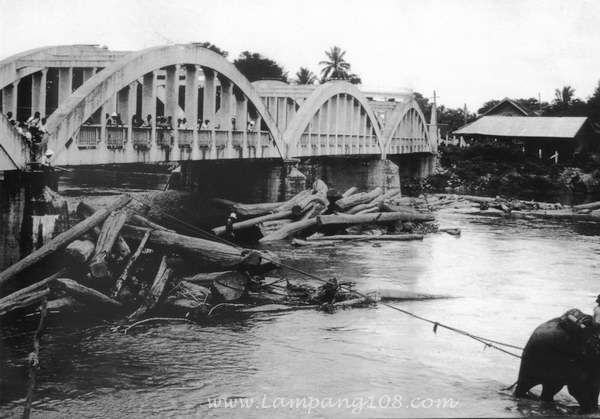 Elephant dragging a log from the bridge. Date unknown. From www.lampang108.com 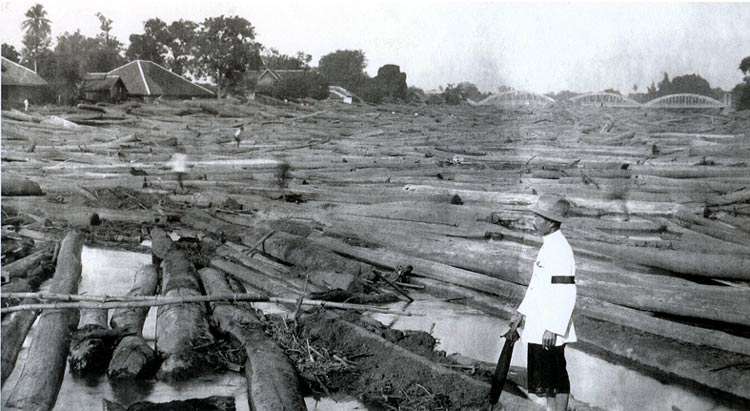 Logs in the Wang River, 1930. In the background the Ratchadapisek bridge. Date and source unknown. 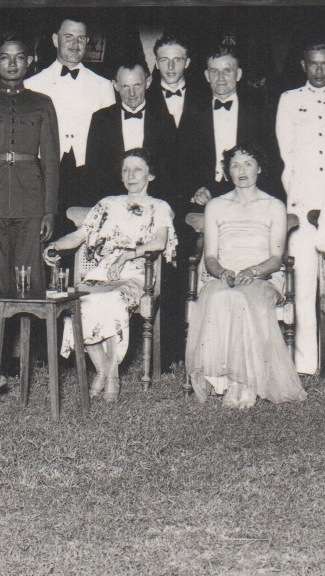 Lucy Starling pictured at the Lampang Sports Club in 1938. She is the woman sitting on the left. Picture by Evelyn van Millingen. Courtesy of Oliver Backhouse.

Lampang was a target for allied airforces. The woman who has been credited with saving the Ratchadapisek Bridge was Lucy Starling. She was an American missionary who spent 20 years in Lampang and was the principal of the Vitchanaree School. Miss Starling left Siam before the war broke out, in July 1941.

Back in the US she started working for the Office of Strategic Services and became the head of the Thailand desk. Here is the story of how she saved the Ratchadapisek Bridge, as she wrote in her book Dawn over Temple Roofs.

“One day there was brought to my desk a sheaf of papers concerning war strategy in Thailand. Among them was a drawing of the bridge in Lampang, which had been marked for bombing by the allies. I was aghast, for the bridge was a mile from the railroad, and had no strategic value whatsoever. It was a lovely structure and its loss would be a serious inconvenience to the populace. I lost no time in getting the word to headquarters, though I had to wait for months to know if my efforts had been successful. Fifteen years later I was introduced to someone who said: “Oh, you are the lady who saved the bridge in Lampang!” I felt like Horatius, though his bridge was destroyed and he had to swim to safety.”

Apparently the camouflage also made it difficult for Allied planes to spot the bridge.

More old pictures of the Ratchadapisek Bridge. The bridge features in the tours of Chiang Mai a la Carte such as the Classic Lampang Railway Journey and Lampang, Phrae and Nan: Past and Present. It is one of the things to do in Lampang. 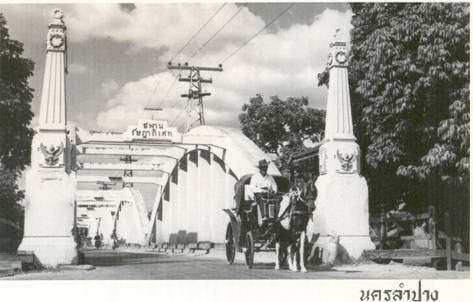 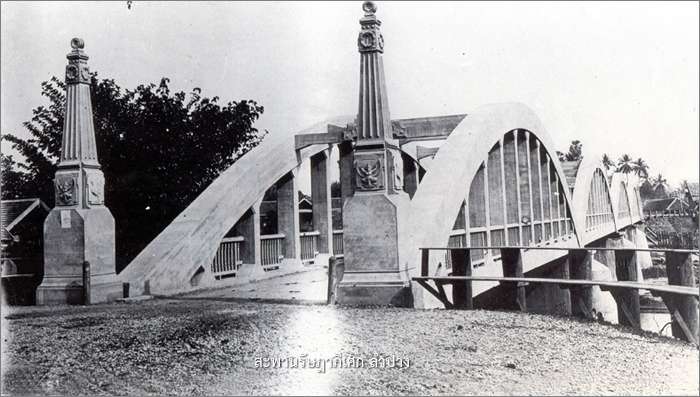 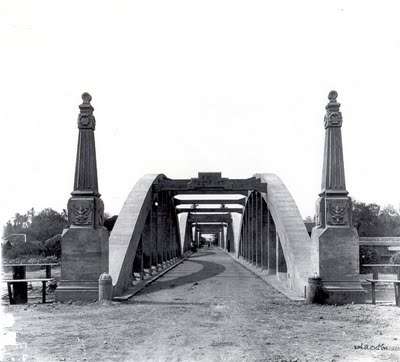 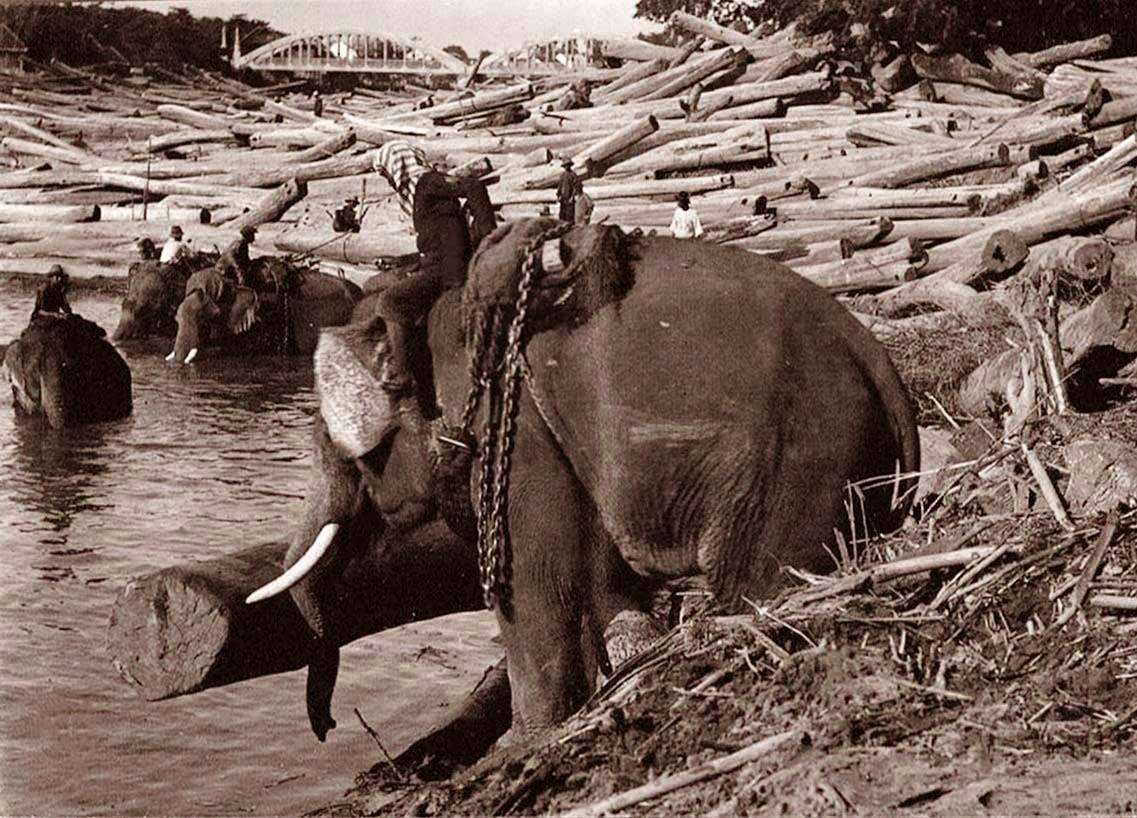 Teak logs in the Wang River. The Rachadapisek Bridge in the background. 1920. Picture Changton Natee. 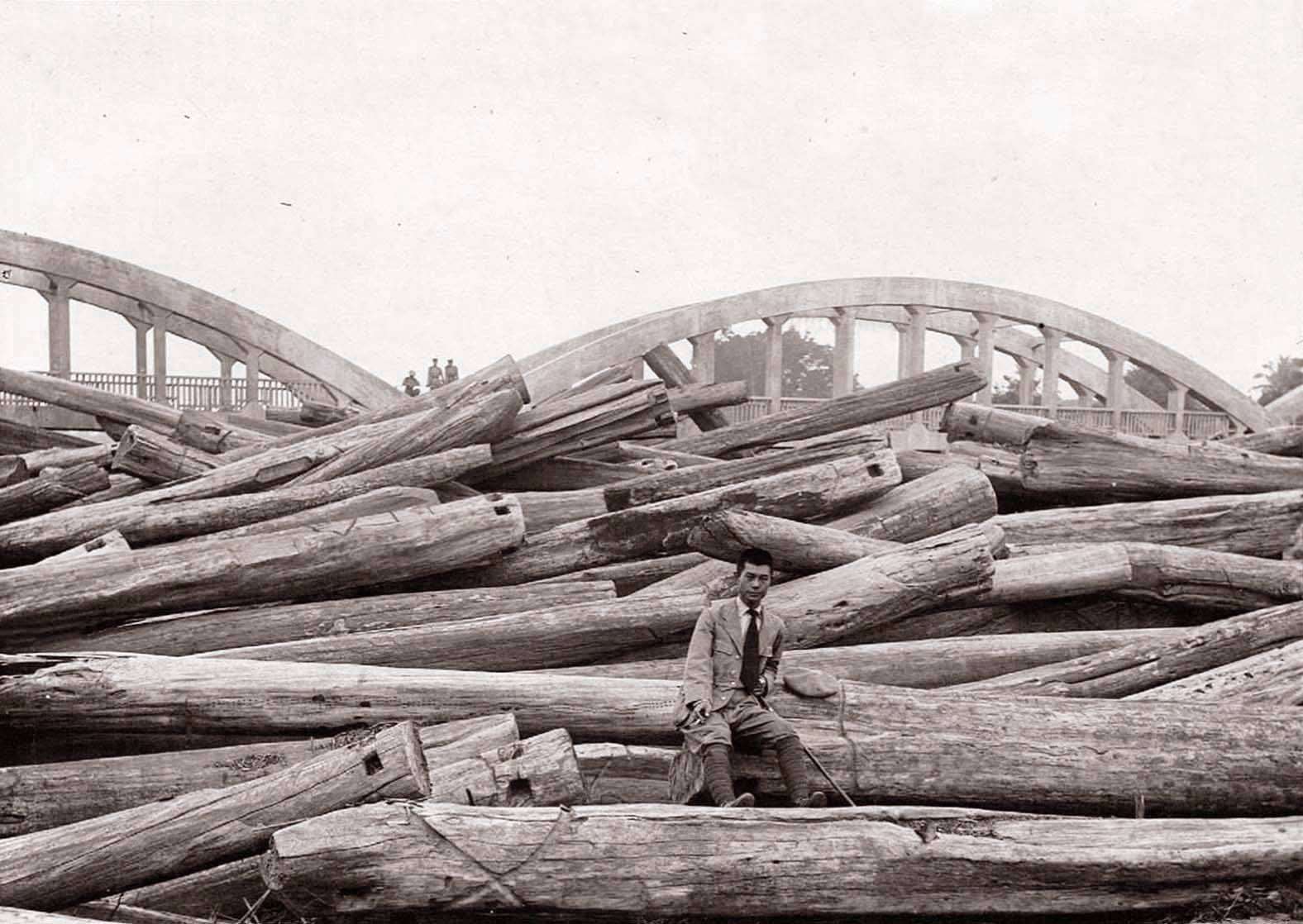 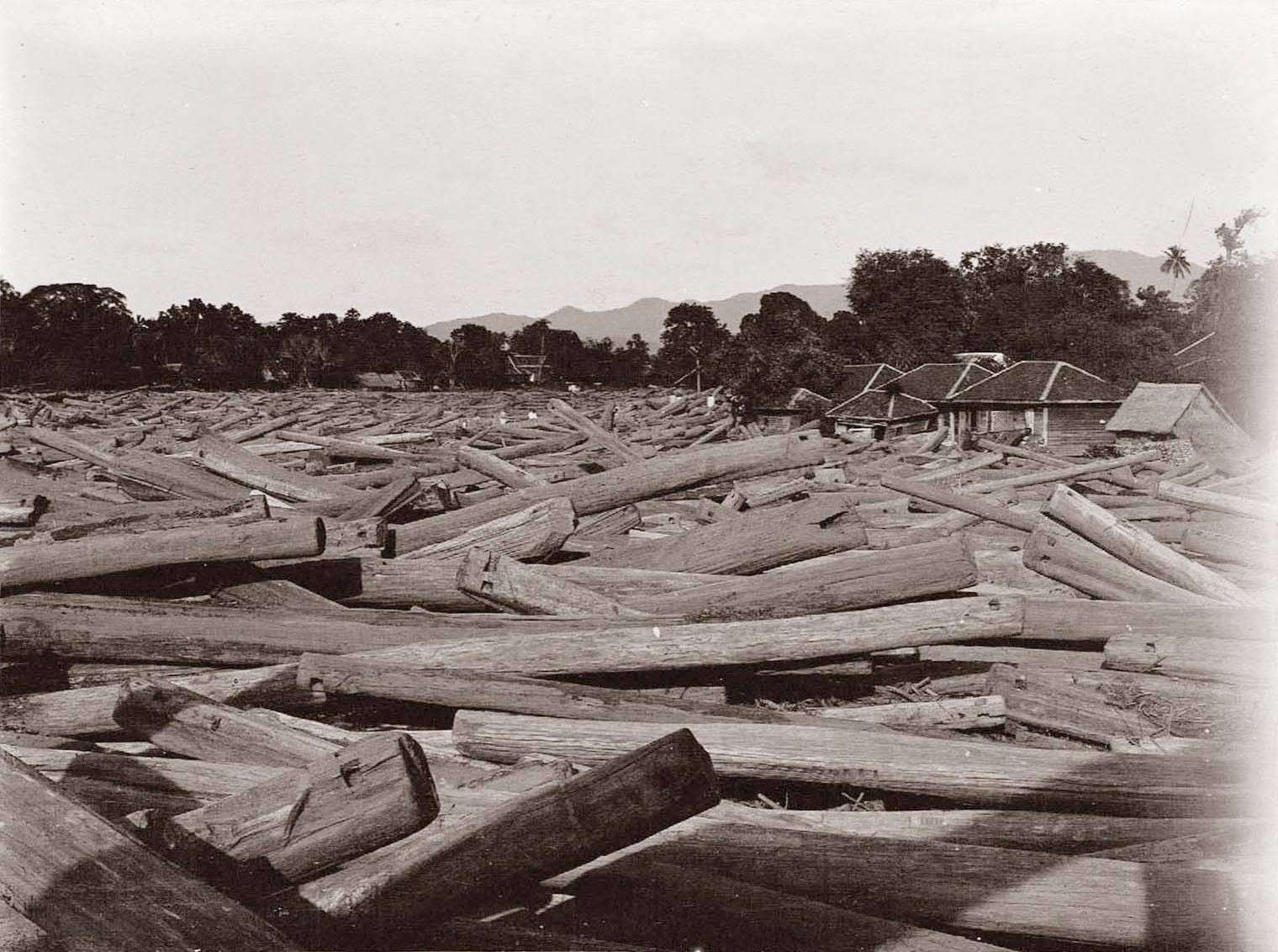